Without fanfare or a ticker-tape parade, my two home schooled children and I set out on a grand adventure west from Chicago through deserts and Rocky Mountains to begin what marks the beginning of principle photography of Born with Curiosity.

First stop, Austin TX to meet with history professor Bill Aspray over smoothies. We spoke about early computing, gender balance in tech, and of course, how much better the weather was in Austin than Chicago this time of year. Bill was incredibly helpful in pointing out that as computer science degree programs aligned themselves more with engineering and less with math, the gap between young men and women graduating with degrees in computer science widens, as less and less women choose computing. 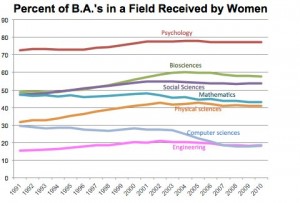 From our research into the early days of software, we also know that in the 60s they started to use the term “software engineer” as a sort of aspirational term to legitimize and professionalize computing. Did this professionalization of the software industry purposefully push women out? Our theory, thus far, is that by casting off the perception of computing being a blue collar secretarial job (a boring and tedious job working with sums that were then repetitively entered into machines), the software industry indirectly and slowly pushed women out of computing.

At the same time that the software industry was aspiring to be seen as a profession on par with law, the equal pay act was put into effect for white collar workers.  Although this was good for women overall, it doesn’t seem to have been good for women in computing.  In 1969, computing was the top paying job for women at a whopping $8k vs. the $13k a man could make.  With the equal pay act, there was simply no advantage to hiring women as computer specialists anymore, and more often than not they were relegated to the secretarial pool (even if they were doing the same work).

As of now, the number of women who get computer science degrees has completely leveled out with the percentage of women who get Engineering degrees. NPR did a piece about advertising being at fault, though I can’t help but think there was more at play than mere advertising. I believe that the move to make software more like engineering combined with the decrease in price and increase in capabilities of hardware, as well as the equal pay act forcing employers to pay women the same wages as men (gasp!) was the perfect storm of events that swept women out of the computing. Of course, it’s all more nuanced that even this, and I can’t wait to find out all of it.

Thinking of Grace in her early life I remembered that she was dissuaded from pursuing engineering as it was viewed as a “man’s job” and so, like many women privileged enough to get an education in the 1920s, she chose mathematics as her career. Still, I wonder why almost 100 years later with so many advances in our thinking that we’d still, as a nation, have such a disparity in women choosing engineering both at school and the workforce. Something to chew on.